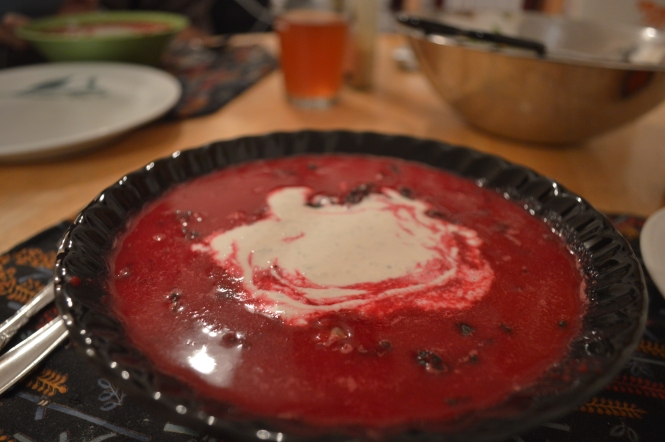 So typically it is not a challenge for me to make something that my overly enthusiastic husband will love to eat… except when it comes to beets. I always joke that since he is a DJ he should like “fresh beets.” I know I always say even though I’m vegan I sure like the “cheese” or puns in this case.

Well anyway I had success in my culinary achievements when I made a beet soup that he actually had seconds of and even the next day was asking if we had any of that delicious beet soup left over.

So here is the recipe:

Wash and cube beets and potatoes (no need to peel them). In a large skillet saute beets with half the onion and half the sweet potato for 5-10 minutes until the beets are starting to get tender. Add enough water to the pan to cook fully cook beets and sweet potato and blend in a food processor or blender. Set Aside.

Then in another pan cook the rest of the onion and cubed potatoes and boil for 10 minutes with the seasonings listed to make a nice veggie broth. I used about 4 cups water, but feel free to use more or less depending on how thick you like your soup. Add the rice, beans, and whole lemon halves after they have been juiced and cook for another 5-10 minutes. I added the kale, cabbage, and juice of 1 lemon at the end since I don’t like my greens very mushy. Add salt to taste and REMOVE the lemon halves. Then add the pureed beet, sweet potato and onion mixture. Remember to garnish with some delicious Lemon Dill Sour Cream (see recipe below).

*side note on why I add the lemon halves to the soup… the skin of the lemon has all the essential oils and a very potent lemon flavor so I like to add them just to up the lemony goodness.

If using a high speed blender add a little bit of water and blend until super thick and creamy (almost as thick as sour cream). Then put in freezer while heating up soup to thicken and spoon it on top. If using a food processor make sure to soak the cashews ahead of time (at least 4 hours… can even soak overnight for convenience) and only add water as needed. You may want to double this recipe to have some amazing sour cream on hand… keeps in refrigerator for about a week.